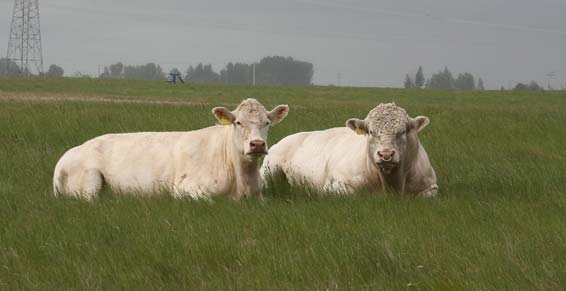 American Charolais are referred to as "purebred" or "recorded" depending upon the percentage of known Charolais blood. The term purebred is used on those that carry 31/32 or more Charolais blood and those less than 31/32 can be referred to as recorded. People wishing to develop a herd will still find it possible to upgrade, using purebred Charolais sires, a foundation cow herd of one of the other cattle breeds or their crosses. Five generations of purebred bulls are required to produced the 31/32 level for classification as "purebred". Sires used in the grading-up process must be registered. The offspring from the first as well as succeeding generations must be registered as "recorded" until they reach the 31/32 level at which time they are referred to as purebred.

The Charolais originated in west-central to southeastern France, in the old French provinces of Charolles and neighboring Nievre. The exact origins of the Charolais are lost to us but it must have been developed from cattle found in the area. Legend has it that white cattle were first noticed in the region as early as 878 A.D., and by the sixteenth and seventeenth centuries were well and favorably known in French markets, especially at Lyon and Villefranche. Selection developed a white breed of cattle which, like other cattle of continental Europe, were used for draft, milk and meat.

Soon after the first World War, a young Mexican industrialist of French name and ancestry, Jean Pugibet, brought some of the French cattle to his ranch in Mexico. Until the mid-1960s, all the Charolais in Mexico, the United States and Canada were descendants of this initial Pugibet herd. Due to the limited number of original animals and the import restrictions which were in place, they have been crossed on other cattle in an upgrading process. Because of the use of the upgrading process few of the Charolais cattle currently found in the United States are of pure French breeding.

It has been said that no other breed has impacted the North American beef industry so significantly as the introduction of Charolais. The Charolais came into widespread use in the United States cattle industry at a time when producers were seeking larger framed, heavier cattle than the traditional British breeds. The increased use on the range indicates that the cows have performed well under a variety of environmental conditions. Their ability to walk, graze aggressively in warm weather, withstand reasonable cold, and raise heavy calves has drawn special praise from many that have them. Bulls have developed a well-earned reputation when used in grading-up for herd improvement. This is especially noted when they are used in herds where size and ruggedness are lacking Charolais are white or creamy white in colour, but the skin carries appreciable pigmentation. The hair coat is usually short in summer but thickens and lengthens in cold weather. Charolais is a naturally horned beef animal. But through the breeding-up program, where naturally polled breeds were sometimes used as foundation animals, polled Charolais have emerged as an important part of the breed. Charolais cattle are large with mature bulls weighing from 2,000 to well over 2,500 pounds and cows weigh from 1,250 to over 2,000 pounds.