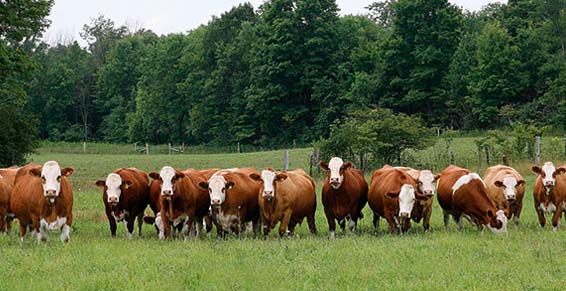 Davis Rairdan have Simmental embryos for sale from a variety of top Fullblood bloodlines.

Simmental Donor Cows Mature Simmental cows will weigh from 1,100 to 1,500 pounds and mature bulls from 2,200 to 2,800 pounds. While it may take 4 years to reach their mature physical size, Simmental cattle are known for their early sexual maturity. Heifers begin cycling at 650-700 pounds, which for many is as early as 9-12 months of age. Yearling bulls reach sexual maturity early and by 15 months of age are active breeders that can service 25 cows or more in a breeding season. Mature bulls can handle 50 cows without stress if managed accordingly.

Weight per day of age and average daily gain are two areas where Simmental excel. Studies conducted in the U.S. have shown that Simmental cattle have the ability to efficiently convert non-concentrates to gain, which significantly lowers cost per pound of gain.

An important characteristic of Simmental cattle is their excellent maternal traits. In the U.S., the Simmental cow has been selected for her ability to conceive at 15 months, have a live, healthy calf as a two-year-old, and be able to re-breed while nursing her calf to maintain a desirable 365-day calving interval. She must be able to continue this cycle without interruption throughout her productive lifetime, which may be as long as 10-12 years.

Shape and size of the udder is extremely important in Simmental cattle. When evaluating the udder, look for a strong fore and rear attachment to the body wall, equal size of all four quarters and rather small and uniform teats that are evenly spaced on each quarter.

Temperament is another important characteristic of Simmental cattle. Quiet dispositions are highly desired under any type of management, and this is a trait that finds favor with beef producers.

Two traits that have been developed in Simmental cattle to include a wider range of color patterns and the introduction of the polled Simmental gene into the breed. Simmental include all colors and color patterns with no restrictions. This has important consequences in areas of the country where sun scald or sunburning is a problem.

History of the Simmental Breed

The Simmental is among the oldest and most widely distributed of all breeds of cattle in the world. Although the first official herdbook was established in the Swiss Canton of Berne in 1806, there is evidence of large, productive "red and white" cattle being found much earlier in ecclesiastical and secular property records of Western Switzerland. Those red and white animals were highly sought because of their "rapid growth development; outstanding production of milk, butter and cheese; and for their use as draught (draft) animals." They were known for their gentle nature, impressive stature and excellent dairy qualities.

The breed made its most recent appearance in North America when a Canadian, Travers Smith, imported the famed bull "Parisien" from France in 1967. Semen was introduced into the United States that same year, with the first half-blood Simmental calf born at Geyser, MT, in February, 1968.

The breed is known by a variety of names, including "Fleckvieh" in Germany; "Pie Rouge", "Montbeliarde", and "Abondance" in France; and "Pezzata Rosa" in Italy. The Simmental name is derived from their original location, the Simme Valley of Switzerland. In German, Thal or Tal means valley, thus the name literally means "Simme Valley".

There are certain traits that are characteristic to all strains of Simmental cattle. Simmental cattle, as a breed, tend to have larger, longer heads than British breeds of cattle. Along with this, they have substantially larger ears that are set lower on their head, a trait that can help identify Simmental and Simmental-cross cattle. Another trait that is typical is the appearance of loose folds of hide in the brisket and dewlap area.
Simmental cattle are also recognized for their ruggedness and substance of bone.

This structural strength increases the longevity of Simmental cattle.